As some of you may be aware, Whoopi Goldberg has received backlash, from both feminists & traditionalists alike, after voicing her opinion on Solange’s elevator brawl with Jay Z. If you are not familiar with the story, you can view her original comments here & her later clarification here.

Her opinion can be summarised as “Men should, and do, have the basic human right of self defence, even if his attacker is a woman”.

You’d think that most reasonable people would agree with her on this. Nevertheless, some people seem to disagree… 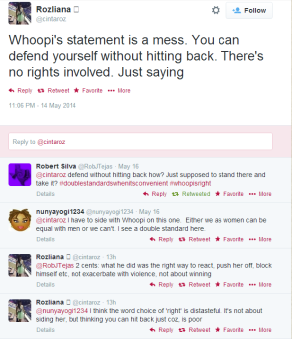 How these people can be so blind is amazing to me. It’s as if they simply can’t see how problematic the implications of their attitudes are & how far from anything that could legitimately described as “equality” they are. All because they have been indoctrinated by the mindless mantra that has been drilled into everyone, especially boys, for centuries, perhaps longer…”You never hit a girl”.

Well, as a lot of people are finally waking up and saying, that’s nothing but a load of total rubbish. The simple fact is that there are situations where a man hitting a woman is completely acceptable & indeed, even appropriate. Gender equality is not achieved by giving women special social & legal protection from physical retaliation when they decide to initiate a physical attack on a man. It wouldn’t be fair if men could do it & it’s not fair that women can do it. This is an attitude that needs to disappear from our culture if true equality is ever to be achieved. Until then, all this promotes is an entitled & bullying attitude from those women who are unscrupulous enough to take advantage of it & prevents men from exercising their right of self defence. People need to get used to the idea that, regardless of sex, if you hit someone you had better be prepared for them to hit you back & if that’s something you find unacceptable then DON’T HIT ANYONE!

Of course, I’m not by any means advocating that anyone, of either sex, attack anyone. On the contrary, the initiation of violence is, in almost all cases, abhorrent. However, self defence is a different matter altogether & has long been considered a right under both UK (including the Commonwealth) & US law. It is also arguably considered to be a fundamental human right under Article 3 of the UN Universal Declaration of Human Rights.

You may choose not to take advantage of it, depending on the situation, but the option to defend yourself from attack should always be open to you, regardless of your sex, or that of your attacker. If a man is being physically attacked by a woman he should have every right to defend himself & that includes fighting back to neutralise that threat, not just blocking any blows that he can & hoping his attacker eventually gets tired & goes away, which is what men are currently limited to at the moment.

Now THAT is equality. Equality of rights & equality of responsibility. These two (rights & responsibilities) must go hand in hand or all we end up with is socially & legally endorsed bullying & abuse. Physical abuse in this case.

Feminists are fond of bandying around the phrase “Feminism is the radical notion that women are people” and are very quick to point the finger when they think they are getting a raw deal. I’d argue that feminism is no such thing but I do of course agree that women should be afforded the same rights & be treated with the same level of respect as men. However, they don’t seem to be too bothered about applying their standard to themselves when the same motto demands that they take responsibility for their actions. They want to benefit from the freedoms & privileges that come with being treated as an adult but they don’t want to be held responsible for their actions like other adults. The phrase “Have your cake & eat it too.” comes to mind.

However, feminism is not itself to blame for this “never hit a girl” attitude, it’s been around for waaaay longer than feminism. Sure, feminists are more than happy to take advantage of it & use it for their own ends, but the blame for initiating & maintaining it falls squarely on the head of gynocentrism, just as so many of the other problems facing men & boys do.

This is why it was not just feminists but also white knighting traditionalists who were critical of Whoopi Goldberg’s comments. Although they may seem, on the surface, to be unlikely bedfellows, both of those groups are gynocentric to the core & two sides of the same coin. This is why whenever resistance to gynocentrism is voiced in the media (rare that it is), you will often see these two groups voicing eerily similar talking points & the backlash over Whoopi Goldberg’s comments is an excellent example of this.

So here’s to you Whoopi. Well done for having the intelligence, integrity, & courage to see through the gynocentric BS & for speaking out in favour of true gender equality, despite the backlash you were inevitably going to receive for it.

All of us here at Men’s Rights Sydney are giving you a standing ovation &, if you are ever in Sydney, there’s a frosty beer here with your name on it.

2 thoughts on “If Only Society Was More Like Whoopi Goldberg”