As an obese, ugly, misogynistic neckbeard who’s afraid of empowered women, lives in my mother’s basement, & can’t get laid, the claim that the Men’s Human Rights Movement (MHRM) is largely made up of people just like me, is one that I hear with startling regularity.

And, you know what? It’s true! The MHRM is mostly made up of people just like me. The only thing is that, in my opening paragraph, I told you a bit of a fib.

You see, I’m not actually a misogynist. In fact, I absolutely love working with, & speaking to, smart capable people & that includes women. I mean, seriously, who likes speaking to or working with stupid, incompetents? Nobody that I know. Also, although I could certainly stand to lose a kilo or three, I’m not obese either, I don’t live in my mother’s basement, I don’t have a neckbeard and, as for not being able to get laid, well… I’m actually married…so, yeah, that part’s true.

However as ridiculous as these stereotypes are, it’s true that there are a tiny percentage of MHRAs who are truly misogynists. I’ve seen them from time to time making ridiculous comments on YouTube videos & blog posts all over the web & while a small percentage of these are obvious feminist agent provocateurs, there is no denying that there are some genuinely hateful people identifying as MHRAs out there & unfortunately they don’t mind making themselves heard. Loudly.
This is, of course, to be expected since every group of any size has it’s fair share of undesirables. In fact it’s such a ubiquitous phenomenon that, here at Men’s Rights Sydney, we have formulated a “law” of sorts that we call “The Nolan Effect”.

Named in honour of the MHRM’s nutbar of all nutbars, Peter Andrew Nolan© (no, the copyright symbol isn’t a typo), the law is as follows…

The Nolan Effect: As the size of any movement increases, the probability of it attracting a complete nutcase approaches 1
If you are unfamiliar with Peter Nolan (I envy you) the video linked below will shatter your fragile shell of blissful ignorance. You have been warned.
It’s easy to write off idiots like Nolan as moronic nobodies & just ignore them but we do ourselves a disservice if we let this sort of thing slide. Thankfully that rarely occurs.
MHRAs criticise the “Oh but that’s not my feminism” feminists for not calling out the offensive & hateful things said by prominent feminists all the time, and rightly so. However, one of the seemingly legitimate counters to this criticism is to point at the misogynistic or hateful stuff said by nutjob MHRAs & claim that it’s no different.
But it is different, VERY different, & this is why…

The validity of this is easy to demonstrate. If we could somehow eliminate all the extremist haters from both the MHRM & feminism in one fell swoop, what would the two movements look like afterwards?

The MHRM would be essentially unchanged. Nobody would notice, or miss, the nutbars & our goals, methods, & even our membership numbers, would remain practically unaffected. Feminism, on the other hand, would completely collapse. The feminists saying this hateful stuff ARE the leaders, they ARE the people who are actively involved in making, or at least heavily influencing, public opinion & government policy. They run the big feminist advocacy groups & the DV & Rape Prevention organisations. They are politicians, authors, lecturers at prestigious universities. One of them, Hillary Clinton, is even likely to be the next U.S. President! In short they, unlike the “Kingoftheuniverse2496″s of the world, matter. Lose those people & feminism loses it’s stranglehold on government, the media, & the public discourse on gender issues. With those go it’s funding, the very support system that keeps it alive. Do away with the hateful feminists & feminism dies.

This is why pointing at nut jobs that call themselves MHRAs & saying “See! You do it too!” is not a valid argument. It’s a completely false equivalency.

Even so, it is critical that we keep on top of the undesirables in our ranks & continue to call them out whenever they rear their ugly heads. To this end, I urge you all to, not only challenge any hateful comments that you may come across, but to also commit the definition of The Nolan Effect to memory & to use it at every opportunity. Insert it into conversations, use it as an analogy, create memes about it, do whatever you can to spread it around, just get it out there. With any luck it will get back to Nolan himself & maybe, just maybe, he’ll decide to pull his head in & stop being a pain in our collective arses. At the very least it’ll ensure that everyone, everywhere knows that Nolan is not one of us, doesn’t speak for us, & that we oppose the stupid & hateful BS that he, & the anonymous nut jobs like him, spew.

In a world where we lack the power to control the actions of other human beings that’s all that anyone can reasonably expect from us. It is also the very least they can expect from us. Unfortunately for feminism, it is also the least we can expect of them but they have always, and still are, falling well short of that modest expectation.

If you’re an “equality” feminist that is sick and tired of being lumped in with all the hateful “radical” feminists then might I suggest that you do more to distance yourself from those people with whom you share a common label? Denouncing their hatred, loudly, publicly, & often, would be a good start. That’s what the MHRM does.

“The Nolan Effect – As the size of any movement increases, the probability of it attracting a complete nutcase approaches 1”

UPDATE; We now have this meme Thanks to Dana from AVFM 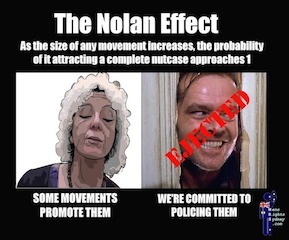 10 thoughts on “The Nolan Effect”