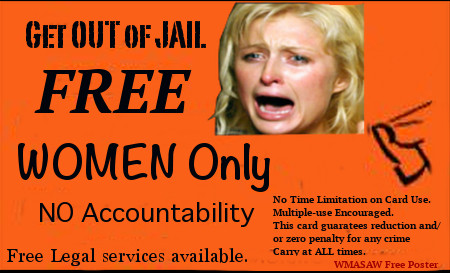 Get out of Jail FREE! Women only of course.

Luke Grant reports exactly the same issues that men have been talking about for years; that the “Domestic Violence Industry” have DELIBERATELY ignored and have continually swept this issue under the carpet at the ongoing behest, and endless interference, of feminists from all around the world and of course, here in Australia.

This time we have two guys who have both been viciously abused by women, finally brave enough to publicly admit what they have been through. They are on their own. They have no one to go to, no one to talk to, and even the police think this is a comprehensive JOKE, as they explain in the interview. The announcer, a former university student, describes how the lecturer, in a class on Domestic Violence “laughed” when it was suggested that men suffer from domestic violence as well. That is precisely the response we have come to expect and it continues to be so.

The MAJOR issue that men face in and with domestic violence, is that if he EVER strikes back, even in self defence, or lays one single finger on that abusive, violent female, HE will be charged, NOT the woman. That is the major problem these men face. They would have the strength to defend themselves but they will not take the chance. The law is biased to such a degree that, even when a female abuses a male, and he responds in kind, HE will be arrested, while the privileged princess is dismissed as the sole victim. It truly is a disgrace. Where is the “equality” and justice in that?

One thought on “Female on Male Domestic Violence”